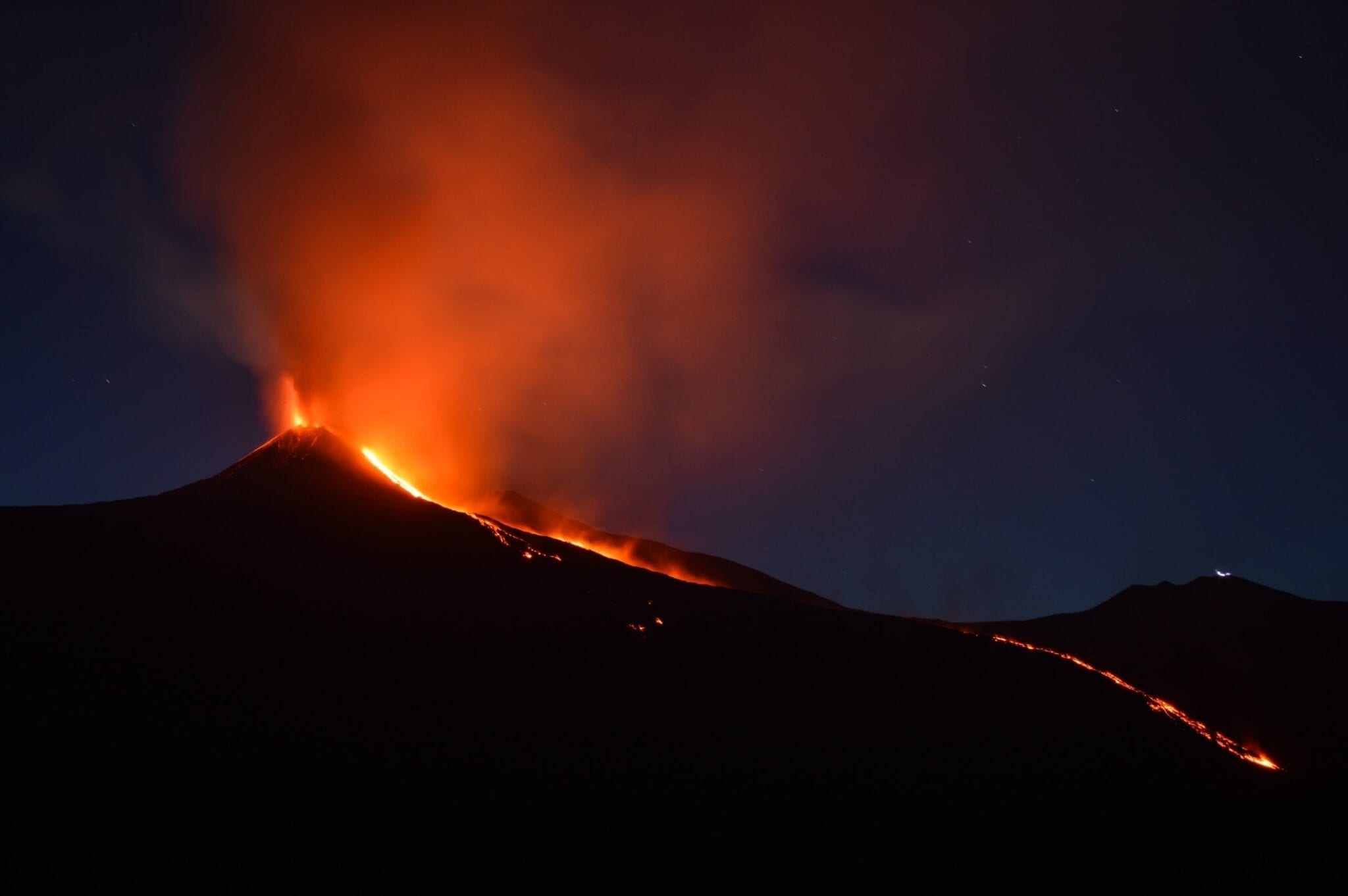 A couple years ago, I was lucky enough to receive a scholarship to attend the Digital Wine Communications Conference in La Rioja, Spain. There, I met fellow expat and wine lover Benjamin Spencer with the Etna Wine School in Mount Etna, Sicily. On that trip, I developed a fascination with the Etna wine region, specifically how the soil shapes the wine. You see, Mount Etna is a live volcano that regularly rains lava and minerals down on the vineyards.

In Spain, Ben gave a presentation that focused solely on the soil. I was hooked because I actually understood what he was saying (amazing for me as I tend to be a bit geologically-illiterate). Ben was kind enough to let me interview him to learn more about the wines — and of course the soil — of the region.

Valerie Quintanilla: Ciao, Ben, thanks so much for taking the time to talk with us. Let’s start at the top: what are the primary grape varieties of Etna?

Benjamin Spencer: The most important variety for the Etna Bianco DOC is the Carricante. For the Etna Rosso it’s Nerello Mascalese. Within these two categories there are some variations and blending components that are found readily in nearly every vineyard and contrada (village), though they are not permitted in large quantities for DOC wines.

Etna Bianco is made from Carricante, and in many cases Catarratto, Minella, Inzolia, and Grecanico are found in small percentages around the mountain and they are used/co-fermented, but they appear in such small quantities that their influence is only partially experienced in the aromas and flavors of these wines.

For generic Etna Bianco, a minimum of 60 percent Carricante is mandated. The remaining 40 percent is a blend of aromatic white varieties. For the Etna Bianco Superiore, the Carricante grapes must be grown in the contrada of Milo, on the east slope of the mountain, and be a minimum of 80 percent of the total blend with the remaining percentage dedicated to the aromatic white varieties. Most producers feature larger quantities of the Carricante, up to 100 percent.

For the Etna Rosso, Nerello Mascalese is king, with Nerello Cappuccio (aka Nerello Mantellato) is queen. Here also we see a blending minimum of 80 percent Nerrello Mascalese with the remaining 20 percent permitted for other aromatic red varieties, including the Cappuccio/Mantellato, or Alicante/Grenache, Pinot Noir/Pinot Nero, Cabernet Sauvignon, Cabernet Franc, Merlot, Aglianico. Most producers only use the Cappuccio, however – and some producers are making wonderful 100 percent monovitigno, i.e. single variety wines from the Cappuccio.

Etna Wine: The Soil & The Volcano

VQ: Tell us a little about the soil of Etna. I am particularly interested in how the lava from Mount Etna affects the soil and vines.

BS: The soils of Mount Etna are about as diverse as they come. They contain a mixed pool of essential minerals and elements that are inherently imperative to growing high quality grapes – Magnesium, Phosphorus, Sulfur, Silica, Iron to name a few.

VQ: So fascinating. How often does Mount Etna erupt?

BS: Eruptions are frequent. We see a few violent explosive and effusive eruptions every year, but she (Etna) rarely ever rests. She is always steaming, burping, and evacuating small quantities of ash and liquid minerals. In truth, she has never stopped “erupting” over the course of 500,000 years.

VQ: How does the soil play into the taste of the wines produced? I have in my notes that acidity tends to be high because of the soil pH. Higher acidity gives them more ageability, right?

BS: The macronutrients within the soil of the Etna DOC tend to be more basic (pH 5.5 – 6.7) than other vineyard soils found outside the DOC, in the scree at lower altitudes, in basins, or valleys, etc. These macronutrients – Magnesium, Phosphorus, Sulfur, Silica, Iron – help the plants to regulate healthy growing cycles and fruit development.

Scree is a collection of broken rock fragments at the base of the volcano, accumulated through periodic rockfall from adjacent cliff faces. Associated landforms are often referred to as talus deposits.

In many instances, these high pH elements help the vine retain or feature more acidity in the grapes, which is reflected in the elevated levels of tartaric, malic, and citric acids. We cannot, however, discount the fact that we are talking about high altitude vineyards – beginning at about 450 meters and reaching as high as 1200 meters above sea level – so the vines have a double ability to retain high levels of acid which contributes to the freshness and, yes, the potential longevity of Etna’s wines.

VQ: Is it true that the soils of Mount Etna are phylloxera resistant since they are sandy? How old are the vines?

BS: We certainly like to think so. As you know, phylloxera struck Southern France in the 1860s after the import of American vines into Europe was permitted to combat oidium. It didn’t arrive in Sicily until 1879.

By then, the entire island had been overplanted with vines to support the demand for wine in the north where the phylloxera outbreak had virtually destroyed the wine industry. However, by 1891 the fillossera (phylloxera in Italian) that had spread throughout Sicily accounted for half of Italy’s national outbreak. But not on Etna. Why? Phylloxera cannot exist in extremely dry soils, and the aphid hates cool and wet sandy environments.

The Etna DOC has both. Because of Etna’s unique geology, it is true that we have several vineyards around the mountain with pre-phylloxera vines. That being said, the producers who plant new vineyards, or are in the process of restoring old or abandoned vineyards where the vines have lost their “magic,” are largely turning toward grafted phylloxera-resistant rootstocks with noble Etna scions/clones.

VQ: You are making me want an Etna Bianco right now! Can you provide some guidance so that readers can find Etna wines at home?

BS: The wines of Etna are exported globally. Where we only had about five producers bottling quality wines thirty years ago, we have over 100 today. That is an incredible scale in quantity. That does not guarantee quality, however – though I truly do see an increase in high quality wines. As many producers know, it will take another generation or two to really see the direction Etna is going, what contrade are best for which varieties, so right now a lot of producers are experimenting.

We see spumante made with native varieties, IGT blends with international varieties, mono-varietal bottlings of southern Italian grapes, and many different schools of thought – naturalists, traditionalists, modernists – so it’s really a great time to taste as much as we can, to learn what’s happening in the landscape and for consumers to join and help guide the conversation.

Find Etna Wines Near You:

Etna Rosso DOC: Feudo Maccari Contrada Santo Spirito Animardente Etna DOC – On the nose, the wine expresses floral notes with delicate and intense violet notes. On the palate it’s a harmonious and well-defined wine with elegant tannins and a sapid and mineral persistence.

Valerie Quintanilla is an American expat in Alba, Italy. She designs custom travel / tour programs while moonlighting as a marketing consultant around Europe and North America. Her work has been featured in Wine Enthusiast, Food & Wine Magazine, Open Skies (Emirate Airlines inflight magazine), Italy Magazine, and more. She also writes Italy wine guides for Carpe Travel. Valerie and her toddler, Il ragazzino, are based in the Piedmont region, but she organizes travel and tour programs, specialty events, and destination weddings throughout Italy. In addition to wine and travel, she loves to run, hike, cook, and is desperately trying to find time to read again.