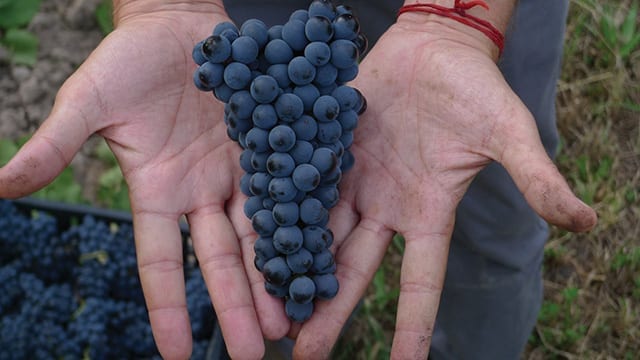 Pinot Noir in France and the World

This is an excerpt from the book Red Wine: The Comprehensive Guide To The 50 Essential Varieties & Styles by Kevin Zraly, Mike DeSimone & Jeff Jenssen, Sterling Epicure, 2017.

Some writers have observed that older wine lovers drink regions, such as Bordeaux, Burgundy, and Rioja, while younger folks drink varieties, such as Cabernet Sauvignon, Merlot, and Pinot Noir. This trend has helped spur Pinot Noir’s popularity, which in turn has placed much of the really good stuff beyond the financial reach of many people. Its prices now rival those of Cabernet Sauvignon in fine restaurants and at auction, an unimaginable development just twenty years ago. Many excellent bottles cost less than $20, but some Burgundy Grand Crus, such as Échézeaux, Romanée-Conti, and La Tâche, commonly fetch more than $2,000 per bottle. As demand continues rising in China, prices will soar even higher, which will inflate sticker prices on Burgundian Pinot Noir across the board.

Due to its soft tannins and bright acidity, Pinot Noir has the reputation of being a red wine for white-wine drinkers— which makes sense when you consider that Pinot Noir is one of the three grapes allowed in Champagne. In fact, a blanc de noirs Champagne consists entirely of Pinot Noir; minimal skin contact creates a wine with no red color whatsoever, which raises an interesting point: All Pinot varieties—Noir, Gris, Grigio, Blanc—are color-mutations of the same variety. But what a difference those mutations make! Can you think of two more diametrically opposed wines than an elegant, well-made Pinot Noir and a blindingly sweet, citrusy Pinot Grigio?

Pinot Noir may be more difficult to grow than varieties such as Cabernet Sauvignon and Syrah, but that hasn’t stopped it from spreading throughout the world and becoming one of the most sought varieties in wine shops and restaurants across the globe. Outside Burgundy, it grows in Champagne, Pays d’Oc, Jura, the Loire Valley, and Alsace. Beyond France, it has grown throughout Europe—particularly in Germany, Austria, Switzerland, and Italy—for centuries. Today growers also cultivate it in Canada, Brazil, Spain, Slovenia, Hungary, Romania, and Moldova.

Food Pairings: Duck and Pinot Noir are one of the world’s great pairings. Grab a decent bottle on the way to your favorite Chinese BYOB and enjoy it with Peking or tea-smoked duck. A good Pinot Noir should be light enough to drink with fish, so open a bottle the next time you’re eating tuna, grilled salmon, or even lobster with melted butter.

You Should Know: Not all French Pinot Noirs are created equal. Some producers who own or source from vineyards in Burgundy also bottle Pinot Noir from Pays d’Oc, a large region spread across southern France. If the price tag seems too good to be true, check the appellation on the label. You can find a decent bottle of Pays d’Oc Pinot Noir, but it will exhibit less complexity than a wine labeled “Bourgogne

Other Notable Countries for Pinot Noir

The new star of the south, Pinot Noir flourished for many years in the Mendoza region, where producers often used it to make white and rosé sparkling wines. More than 4,000 acres of Pinot Noir grow in Argentina—a small fraction of total vine- yard land—but old bush-vine Pinot Noir from Neuquén and Río Negro in Patagonia are producing premium reds. Color ranges from medium to deep red, and strong acidity balances the grape’s typical flavor profile of cherry and chocolate.

IN HIS OWN WORDS

“Pinot Noir can be considered by some as ‘king of all grapes.’ Pinot Noir is probably one of the most transparent grapes, as it gives back what it finds in the soils and microclimates of where it is planted. The ones I drink convey incredible elegance, purity, minerality, and balance. It is a very delicate and subtle variety, which provides the most ethereal experience.”

About 6,500 acres of Pinot Noir flourish in the colder climates in the north and south of Chile, such as in Casablanca, San Antonio, and Bío Bío. The severe, sun-filled days of a Chilean summer make for ruby-colored wines. This depth of color often belies the delicate elegance of a well-crafted Pinot Noir, which here has a palate of black cherry and lightly stewed plum balanced by soft chocolate notes and refreshing acidity. Many Chilean winemakers hang their hats on Carménère and Cabernet Sauvignon, but Pinot Noir could turn out to be Chile’s little grape that could.

As the red wine craze continues in China and vineyard acreage grows, Pinot Noir from the Red Dragon will become an increasingly hot commodity. Pinot Noir grows in small but notable amounts throughout the country, including Shaanxi and Tianjin; the northeast provinces of Beijing, Hebei, and Shandong; and the northwest provinces of Xinjiang, Gansu, and Ningxia.

If you think of Germany exclusively as white wine territory, think again. The grape known here as Spätburgunder (SHPATE-boor-GOON-dehr) grows so widely here that Germany ranks as the world’s third largest producer of Pinot Noir, behind France and America. Throughout the 1970s, producers sacrificed quality on the altar of quantity, but a handful of winemakers saw Pinot’s potential in the late 1980s and reversed that trend. Thanks to them, Pinot Noir acreage doubled here between 1990 and 2010. Most of this wine remains within Germany’s borders for domestic consumption, though, making these desirable bottles difficult to find on the international market. The best regions for Spätburgunder are Ahr, Baden, Franken, Pfalz, and Württemberg. German Pinot Noir has a floral aroma and flavors of tart cherry and mocha with earthy and savory notes.

Known as Pinot Nero here, Pinot Noir flourishes in the cooler north of the country, especially Trentino, Alto Adige, Friuli, Lombardy, and the Tyrol. A good portion of it goes into sparkling wines, such as Franciacorta, but you can find a decent amount of good Italian Pinot Noir. The best versions hail from Alto Adige, but a few producers in Friuli and Lombardy do it right as well.

During the last fifteen years, plantings of Pinot Noir have increased almost nine-fold. More than 12,000 acres of it account for 15 percent of the country’s vineyard land, making it New Zealand’s most widely planted red grape. About a quarter of it goes into sparkling wine, and the rest into still wine. Central Otago Pinot Noir has everybody talking—and it grows there in nearly equal amounts as in Hawke’s Bay—but you can find almost half of the total acreage in Marlborough. Smaller amounts grow in Wairarapa, Gisborne, Nelson, and Waipara.

Producers here commonly use Pinot Noir in sparkling Cap Classique wines, but more vintners are bottling it as a single varietal. It grows in small amounts throughout various areas, the majority in Stellenbosch. Walker Bay Pinot Noir is stirring up interest as well. The berries are dark purple, but the wine often appears ruby or black cherry red. Expect cherry on the nose and palate too, as well as blackberry, chocolate, coffee, and citrus zest.

Unless you live or lived in Switzerland, you’re probably unfamiliar with Swiss wine. Unlike their watches and chocolate, the Swiss wisely keep their wine to themselves. The most widely cultivated red wine grape in the country, Pinot Noir here is called Blauburgunder (BLAHW-boor-GOON-dehr). The majority grows in the Valais region, in the far north reaches of the Rhône Valley, but you can find it near Zürich and Graubünden as well. Swiss Pinot Noir has an intense, fruity bouquet with a restrained elegance on the palate.

The best versions come from cool climates. The Sonoma Coast produces a large amount of high-quality, small-batch Pinot Noir that offers flavors of cherry, chocolate, coffee, light spice, and orange zest. Aging in barrel and bottle adds flavors of vanilla and Mediterranean herbs. Once called the coldest region in California, Carneros has been prime Pinot territory for many years. The style here tastes somewhat juicy, with flavors of raspberry and strawberry and touches of vanilla and orange peel. The Russian River Valley—in the far northwest of the Sonoma Coast and farther north in Mendocino County’s Anderson Valley—produces the most elegant California Pinot Noir. In addition to cherry and chocolate, flavors include raspberry, violet, and perhaps soft touches of mint. For more intensity, head south to the Santa Lucia Highlands, where the deeply colored Pinot Noir bears flavors of blackberry, anise, and truffle. In Santa Barbara County, Sta. Rita Hills offers Pinot Noir of equal intensity and structure along with flavors of black plum, lingonberry, and mocha. Many California wineries that specialize in Pinot Noir produce multiple bottlings each season using grapes from single AVAs or even single-vineyard sites.

Pinot Noir tends to do best in the cooler climates of the Finger Lakes AVA, but it also does well in the altitude of the Hudson Valley and the sea-cooled North Fork of Long Island. Hotter years produce more concentrated fruit flavors, while moderate summers can make for elegant, restrained wines. Expect the typical flavors of freshly picked cherry, black cherry, and a hint of cranberry. Secondary aromas and flavors include coffee, mocha, oolong tea, and a touch of forest floor.

Connoisseurs dare compare only Oregon Pinot Noirs with those from Burgundy. Consider the amount of Burgundian investment in Oregon, and you’ll understand why. Burgundy’s Drouhin family has had a winery here since shortly after the Willamette (“It’s will-AM-it, damnit!”) Valley achieved AVA status in 1983. Burgundy stalwart Maison Louis Jadot released Resonance, its first wine from Oregon, in 2016. The Willamette Valley grows three-quarters of all the grapes in the state, and Pinot Noir shines as its bestseller. Each July, the International Pinot Noir Celebration, a festival extolling the virtues of the grape, takes place in the Willamette Valley. The region is so Pinot Noir–specific that officials have carved it into six sub-AVAs: Chehalem Mountains, Dundee Hills, Eola-Amity Hills, McMinnville, Ribbon Ridge, and Yamhill-Carlton District. Even California wineries are joining the action. Some are trucking grapes from Oregon and making good Pinot Noirs at their own facilities. Expect flavors of black cherry, cranberry, black tea, mocha, and a hint of mushroom or truffle in Oregonian Pinot Noir.

IN HIS OWN WORDS

“The Pinot Noir grape grows well in the Willamette Valley due to the overall cool climate along with the dramatic change of temperature between day and night during growing season. We are enjoying the intensity, volume, and nice precision that we taste within our wines.”