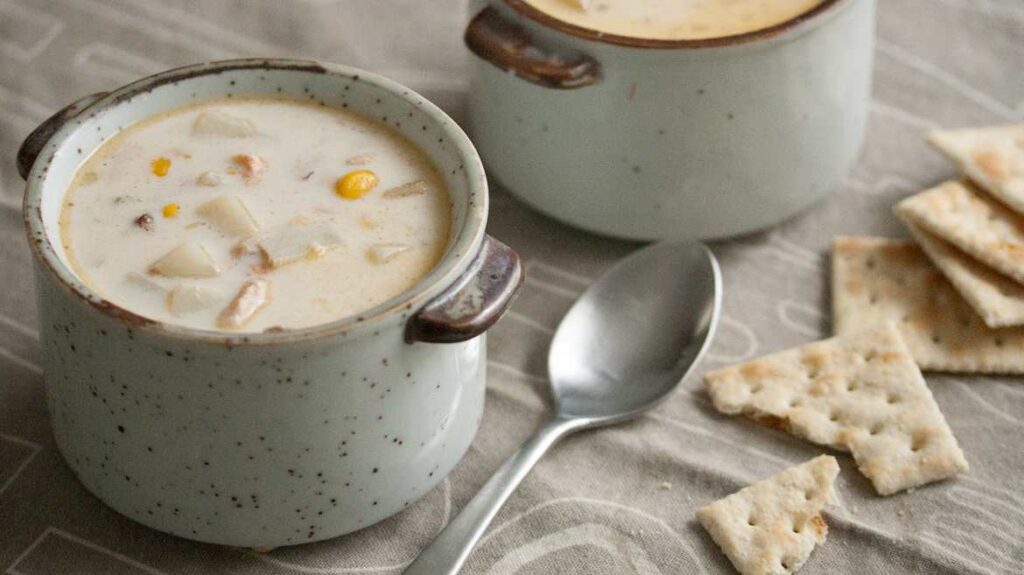 A Propah Chowdah: What Wines to Pair with the Four Chowder Food Groups

Each year at the beginning of fall, people from all walks of life gather in Long Beach Island, NJ to revere one thing: chowder. ChowderFest has been celebrated in LBI for over thirty years, taking place in the seaside town of Beach Haven. Hundreds of chowder enthusiasts enter their homemade recipes into the tasting competition, which is split into several sub-divisions: Best of: Manhattan, New England Chowder, Rhode Island, and Corn Chowders. Most of the entries are submitted by local restaurants, but in previous years submissions have come from as far as Ireland.

In addition to being delicious on its own merits, chowder can be exquisite when paired with the right wine. ChowderFest doesn’t currently incorporate wine compatibility into its tasting rubric – but that’s where we come in. Below are several wines that bring out the best in any chowdah along with recipes to try…unless you decide to attend ChowderFest yourself.

What Wines to Pair with the Essential Chowders

The core of a Manhattan clam chowder is based around vegetables, such as tomatoes, onions, carrots, and celery. Its consistency is thick, and it is more frequently enjoyed by those who favor a healthy diet over those looking for comfort food. The veggies at its nucleus go especially well with a red wine, such as the Louis Jadot Beaujolais-Villages. Comprised solely of Gamay, this wine immediately evokes flavors of red berries and contains eminently expressive aromas.

In stark contrast to its rival from New York, the New England clam chowder eschews any pretense of being particularly vegetable friendly. Instead of tomatoes as its foundation (and suggesting so is considered a crime in many N.E. municipalities), milk and cream are the primary ingredients found here. It’s only suitable that a white chowder be paired with a white wine – and that’s where the Villa Matilde Falanghina Campania IGP comes in. The Falanghina hails from the Campania region of Southern Italy and is composed entirely of the Falanghina grape. Its sapid notes go especially well with seafood dishes, such as clams.

Attempting to bridge the divide between New York and New England seems like a fruitless endeavor. The Rhode Island clam chowder appears to realize this, as the most common iterations of it contain neither milk nor tomatoes. While this might seem like a literal recipe for disaster among chowder puritans, the Rhode Island CC has carved out a niche with fans who appreciate its unadulterated seafood flavors. In terms of finding an end-of-summer match for this dish, the Salviano Pinot Nero Rosé Umbria IGT should do the trick. Hailing from Italy, this rosé is bone dry with medium acidity. Its succulent flavors are versatile enough to go well with a variety of dishes, including this unexpected, middle-ground chowder.

The last chowder derivation we have departs from the norm entirely – it ditches clams and replaces them with corn. While certainly appearing and tasting different from its counterparts, the corn chowder borrows some flavors from its New England cousin, as it maintains the latter’s creaminess. This chowder goes particularly well with white wine, such as the Pighin Pinot Grigio Collio DOC. Made up of exclusively Pinot Grigio, this Italian white has an aromatic finish that is emblematic of the Collio appellation. On the nose, it has delicate notes of pineapple and acacia blossoms.

Whatever form of chowder you’re partial to, it’s clear that all of them serve their culinary purpose for their respective fans. If you’re in the area and interested in attending, keep an eye on their website at chowderfest.com each year when summer comes to an end. The 2021 ChowderFest takes place the first weekend of October in Beach Haven.