Rebecca Banks is the Corporate Beverage Director for the Keith McNally-owned restaurants in New York City, currently including Balthazar, Minetta Tavern, Morandi, Lucky Strike, and Augustine.  She has been with the group since 2005, starting out as a cellar “rat” and working up through the ranks of the beverage department.  During that time, she also trained staff and collaborated in the wine programs at Pravda, Schillers, and Pastis, as well as opened Pulino’s, Balthazar London, and Cherche Midi.

Rebecca holds the Advanced and Diploma Certificates from the Wine and Spirits Educational Trust (WSET). She has completed the introductory course to the Court of Master Sommeliers and the FCI Fundamentals of Wine courses.  She holds the Grand Diploma in Culinary Arts from the French Culinary Institute (now International Culinary Institute) in New York City where she was a James Beard Foundation 2004 Scholarship winner.  She returned to teach wine classes at ICI until 2011.

Rebecca travels annually to France as well as regularly within the US to visit winemakers and learn about local wine production, trends, and challenges.  She volunteers on the tasting panel at Wine&Spirits magazine.  She continues to educate her staff as well as consumers and colleagues about the ever-changing and fascinating world of wine.

I became enamored with the wine business while I was taking the French Culinary Institute, Fundamentals of Wine Class, led by Andrea (Immer) Robinson.  It was then being held at the original Union Square Wines (actually in the square!), which was a regular stop for me after visiting the green market on Saturdays.  I had no concept of wine turning into a career but I knew I enjoyed learning about the endless winemaker stories, regions and grapes.  This was at a crossroads for me.  I had left my earlier career in Fashion Design and then Film and Print styling and was looking for something, I didn’t know what!  I continued on the food and wine trajectory and enrolled in the nine-month culinary degree course from FCI, thinking maybe I’d pursue food styling or working for food and wine magazine.  Ha!  After a few failed catering jobs, no desire to work the line, and finding out editorial and food styling work was run by about 3 people in all of Manhattan, I was introduced to Chris Goodhart, then wine director at Balthazar restaurant in SoHo.  I anxiously sat in on a pre-meal staff training while he talked about some new wine-by-the -glass and was instantly inspired and transported.  I practically begged for the unpaid internship position (that I wasn’t sure was even available) just to get my hand on bottles, experience being in the cellar, and maybe, just maybe, someday be able to talk about wine that inspired people in the way I had just witnessed. It was really then, that my wine “Career” began.

I suppose the most frustrating part of my job is the corporate politics.  It is a job like any other job and there are long meetings, short meetings, lots of different opinions and personalities that don’t always gel…there’s time when I feel like I could be doing something more useful and my way would be better.  But, working for a larger restaurant group, I’m part of a bigger engine.  Sometimes things take longer to get accomplished and my ideas may get shot down 9 out of 10 times. However, slow and steady has always proven to work in my experience.  So I try to push when I need to and go with the flow the rest of the time.  No one gets hurt!!  The rewarding part of my job far outweighs any negatives.  I get daily, sometimes hourly, confirmation from our servers that they just sold a wine that we recently tasted or they went out and had the most amazing wine experience or they got so much out of class we recently held. These moments give me goose-bumps!  I love the team that I work with, who all pour so much of themselves into the most mundane activities like processing invoices and stocking well-vodka to being able to wax poetic about the recent release of some allocated bottle! We’re a team!  I’m rewarded with the amazing people I have met and worked with who make, sell, and import wine.  Many of them have become close friends.   I’ve been blessed with the opportunity to travel and visit wine regions as well as dine in some of the most accoladed restaurants in our own city.  All of this makes me feel like a rock star and I absolutely love it!

I have so many fond memories over the course of my 16 year wine career.  One that sticks out is a wine department holiday party in late January (holiday celebrations always happened after January 1 in the restaurant industry) at Chris Goodhart’s slightly post-modern but comfortably-lived in apartment in Carroll Gardens sometime around 2006-2008.  He had bought a case of Movia Puro Rose sparkling for Lucky Strike because, well, he just wanted to.  It didn’t fit into any wine program of ours that existed at the time, but that rarely stopped him. After sushi, paté, champagne, and whatever else we enjoyed that night, he insisted on opening the “pièce de resistance,” the Movia!  About 5 of us huddled tightly together in his teeny tiny powder room.  An ice cold Movia neck submerged under a compact sink full of water as Ales Kristancic suggests. The bottle was disgorged as we all watched in awe!  POP!!!!  I’m not sure it was as delicious as we thought it would be and a lot of wine was lost in the process, but man, it was fun.  I have since disgorged 3 more of those bottles for training.  I believe there are 8 more bottles still available at Morandi restaurant in the West Village for a song.

Trends are hard.  I don’t like to follow trends.  They come and go and are often forgotten.  I think everything will eventually end up in a can. Maybe some chef will create a freeze-dried, powdered wine and we can snort it and somehow experience true terroir through our nervous system, creating wine nirvana.  But seriously, I see smaller packaging formats, wine flights “to-go” at retail, and more interactive wine moments as consumers stay home more, entertain at home, and rely on more remote-access knowledge. Dining out, wine tourism,  and visiting a local wine shop will not end, but will be supplemented by virtual and individually curated wine and spirits experiences. 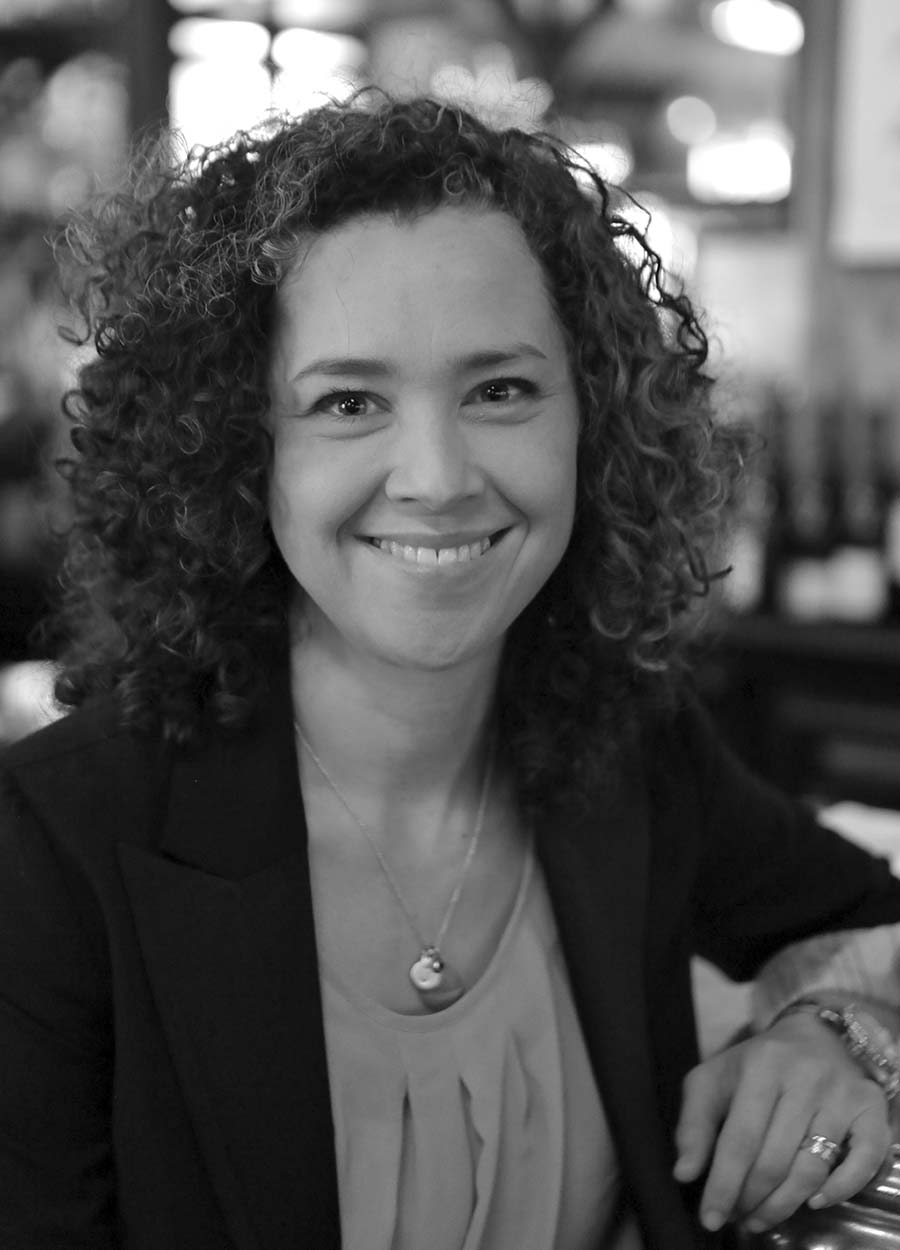 "At the end of the day, we’re creating happy memories..."

“When you’re going through hell, keep going.” Okay, Okay, Winston Churchill did not actually say that to me, but especially now, I come back to that advice A LOT!!  I’ve gotten so much advice over the years. Liz Willette taught me how to bring my breast pump with me to work and how to store the milk properly in the walk in.  One of my interns told me what the best Russian restaurant was to go to in Brighton Beach. Another wine director colleague helped me to negotiate my first raise.  It’s a tight community and we all look out for each other.  Wisdom is everywhere.

Take your time and smell  the roses. This is not a sprint, but a marathon.  Okay, that’s two.  While an accredited wine education is so valuable (and I have so many friends and colleagues that I have remained close to because of it), the real work starts after.  This is a life long career.  It’s beyond a career.  It’s a way of life.  It encompasses geography, geology, biology, agriculture, chemistry, finance, and understanding of national and international trade on the wine making side.  But it also includes hospitality, cost control, people skills, time management, passion, an open mind, and a thick skin on the business side.  But life is full of so many other important things, whether that be family, friends, culture, sports, or whatever else gets you through the day.  Don’t forget that because that’s what makes you unique. There’s no ONE person that perfectly encompasses all of these skills.  This is a team effort and you have to be willing and able to work with people.  At the end of the day, we’re creating happy memories.