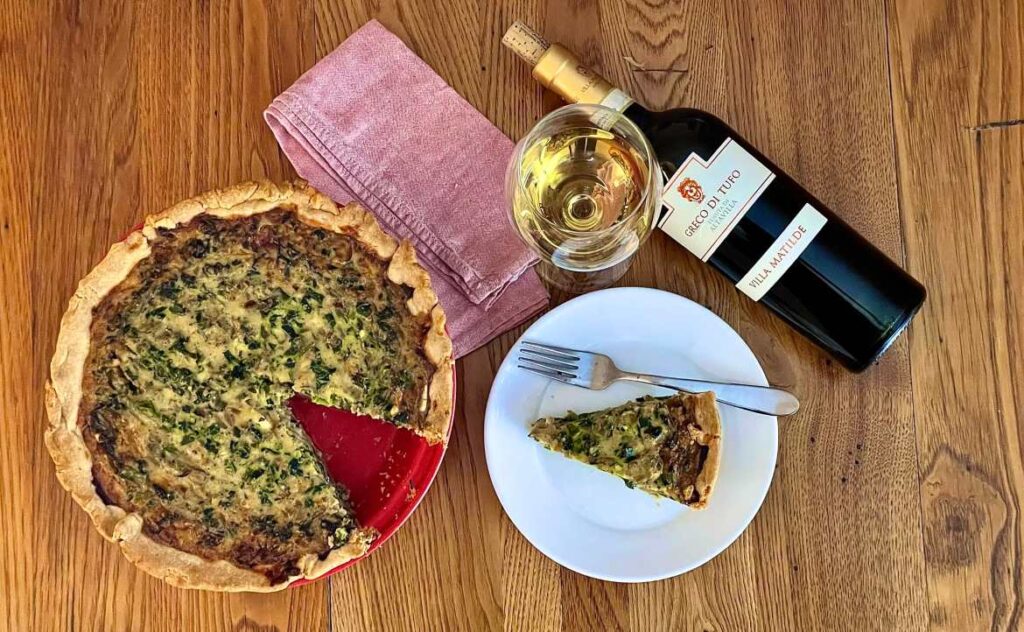 In Wine and Food Fresh Pressed

Before I even knew Somerset cheddar existed, when I tasted my first bite of Extra-Sharp White Cheddar as a kid I was wowed by how much better it was than blocks of orange, factory-made cheddar. Sure, the Extra-Sharp was also factory-made, but it had twice as much flavor. I also (still) prefer White Cheddar Cheez-Its over original, because the cheesier flavor and dusting of “cheese” left on my fingers after reaching into the bag is, well, just a lot more delicious.

I was introduced to more and different and better quality cheeses over the years, as one is, and gradually I stopped buying cheddar at all. I will if I need it for a recipe but more often than not, I need Parm, Pecorino, or mozzarella. Most of my cheesy, baked recipes are Italian and Italians don’t fraternize with cheddar.

(Re)-enter the Cheddar. Wyke Farms Cheddar, to be exact. This cheese is incredible. It’s everything the OG cheddar was (and still is) that began in Somerset, England hundreds of years ago and had monarchs pre-ordering wheels. It is the mozzarella di bufala to America’s string cheese. It’s the mortadella to America’s bologna (does any other country ruin things like this?). It’s literally the real cheddar hailing from Somerset to America’s Kraft cheese. Yep, those plastic slices are actually re-pasteurized cheddar shreds and sodium phosphate. It was so popular, cheddar became the world’s first mass-produced cheese.

Wyke Farms has crafted cheddar cheese out of Somerset, England for 160 years, and today they do so with all green energy: they’re 100% self-sufficient through various sustainable methods—check out this fun, clickable graphic explaining the different ways—and the Reserve Vintage Cheddar I used in the recipe below is 100% carbon neutral, the world’s first. Studies have shown that 35 of the family farms from which Wyke sources their milk have a carbon footprint 20% lower than UK’s national average. And they aren’t a drop in the milk pail: Wyke Farms makes 16,000 tons of cheese annually, yet still commit to green energy and sustainability, proving that even large operations can work to support the environment—and it’s the big guys that need to be doing it more.

The Best Recipes Are Created from Mistakes

I had a bottle of white Campanian wine Villa Matilde Greco di Tufo on one hand and a block of this incredible cheese on the other, so decided to make something that did not necessitate a trip to the grocery store: Ivy’s Reserve Vintage Cheddar, Caramelized Onion, and Spinach Tart.

White wines pair beautifully with cheese and cheesy dishes because their crisp profiles and acidity cut through the rich flavors. When I tasted the Reserve Vintage Cheddar, my eyes popped—it’s that flavorful. Not to get too cheese-nerdy here, but there were even crystals (I discovered they are  Calcium Lactate crystals as opposed to the Tyrosine ones you normally taste in Swiss and Romano)! It required a fuller-bodied white with a lot of crisp aromatics yet complex fruity notes that can stand up to the intense cheddar flavor, and Villa Matilde Greco di Tufo fit the bill: peach, apple, sweet almond, and yellow flowers hit the nose; the body is quite full yet cuts through and plays well with the cheese flavor.

I’ve added my own recipe below because I made a couple of adjustments, namely a major measuring mistake: I read 10 oz. of cheese instead of 100 gr, equating to almost three times as much cheese (lol). I also didn’t have enough eggs, which really just showed me how versatile quiches and tarts can be. Then again, the extra cheese probably made up for the lack in volume.

It was, as expected, delightfully cheesy, but also extraordinarily rich in flavor from the caramelized onions. Wyke cheeses are available in the U.S. on Amazon, Safeway, and Fresh Thyme Market, so I highly recommend you buy this cheese instead of using some of those orange building blocks. It’s a world of difference and worth it.

Click here for the original recipe version, see below for my own:

Pairing this with Villa Matilde Greco di Tufo was perfect—the wine’s flavors almost came across as delicately sweet (there’s no sugar in the wine; it’s just the perception of a savory, salty dish together with a fruity, floral wine), and the peach and almond stood out even more.