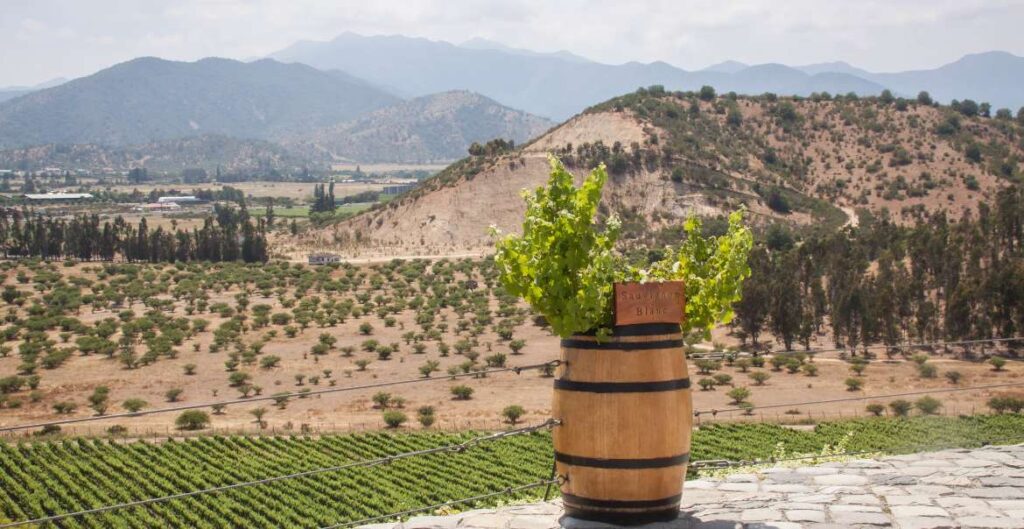 You’re probably already familiar with two popular choices of Sauvignon Blanc: the steely, mineral Sauvignon Blancs from France’s Loire Valley (Sancerre is one) and the fragrant, grassy, tropical-fruit scented examples from New Zealand. However, Sauvignon Blanc is produced in many other regions as well.

Chile, a country known for quality red wines made from Cabernet Sauvignon and Carménère, is quickly becoming one of the leading producers of world-class Sauvignon Blanc. Today, the grape variety is the country’s second most planted (after Cabernet), with many of the best offerings coming from the cool coastal region west of Santiago.

Sauvignon Blanc in Chile dates back to the early 1980s when a handful of producers began to explore the country’s coastal regions. Long and skinny, most of the country is, in fact, close to the ocean. Therefore, when we talk about the coastal regions of Chile, we are talking about areas that are very close to the sea, many within just a few miles. Some of the vineyards even have ocean views!

One of the pioneers of Chilean Sauvignon Blanc was Pablo Morandé who, in 1982, planted the first vines in Casablanca, just northwest of Santiago. Morandé was influenced by what he had seen on a visit to Carneros, California, a cool-climate area close to the San Francisco Bay, and he believed Casablanca’s seaside location would provide a similar environment for growing fresh grapes.

After achieving excellent results, it wasn’t long before other wineries followed Morandé’s lead. By the 1990s, Casablanca, which until then had focused on dairy and livestock farming, was becoming one of Chile’s most prominent areas for Sauvignon Blanc and other cool-climate grapes like Chardonnay and Pinot Noir.

“[In Casablanca], the extremely cool climate conditions, focus on low yields, and general water deficiency leads to a very aromatic style that’s welcomed by consumers,” says Stephanie Cain in vinepair.com. “It’s so popular that, since 1990, vineyards planted with Sauvignon Blanc in the region have increased 5,900 percent.”

The successes of Sauvignon Blanc in Casablanca led to a wave of new plantings in other coastal areas, notably in Santa Domingo and San Antonio and its sub-region Leyda Valley, as well as in areas further north, such as Quillota, Zapallar and Limarí, and to the south in Paradones. An example of a Leyda Valley Chilean Sauvignon Blanc is the Montes Limited Selection Sauvignon Blanc. With vineyards that enjoy a view of the sea, this refreshing, lemony Sauvignon Blanc could be taken for one from New Zealand with its bright and flashy fruit and grassy herbaceousness.

Chile’s coastal terroirs are marked by two major elements that contribute to the wines’ character and distinct nuances: the Humboldt Current and the Coastal Range.

The Coastal Range is a mountain range that runs from north to south along the Pacific Coast and is made up of various types of granite. While the western slopes (Leyda, San Antonio, Paredones, Zapallar) are directly affected by cooler maritime conditions, the eastern slopes (Casablanca, Quillota and Litueche) are provided with a barrier from cold sea air. These site variations, along with different soil types, result in a wide stylistic range among Chile’s coastal Sauvignon Blancs, giving consumers many fine choices.

The original post by Lisa Denning can be found on her blog, The Wine Chef.

Lisa Denning’s love of food, wine and spirits has led her on the path to many edible adventures. Attending the International Culinary Center in New York City was the first step on this journey, followed by jobs in the food business. In 2012, she began to focus on wine and spirits as a sales associate at Sherry-Lehmann, one of the oldest wine retailers in the U.S. In 2016, Denning founded The Wine Chef, now an award-winning blog with content devoted to wine and food pairings. Additionally, Denning writes for Grape Collective where she is known for her winemaker interviews. For delicious food and wine pairings, follow her instagram @nycrestaurants.